Several of the basic types, including integers, can be modified using one or more of these type modifiers:

A floating point type variable can hold a real number, such as 420.0, -3.33, or 0.03325. The words floating point refer to the fact that a varying number of digits can appear before and after the decimal point. You could say that the decimal has the ability to “float”.

In most modern architectures, a float is 4 bytes, a double is 8, and a long double can be equivalent to a double (8 bytes), or 16 bytes.

Floating point data types are always** signed**, which means that they have the capability to hold both positive and negative values.

A string is an ordered sequence of characters, enclosed in double quotation marks

An array as a collection of variables that are all of the same type.

When declaring an array, specify its element types, as well as the number of elements it will hold.

Every variable is a memory location, which has its address defined.

That address can be accessed using the ampersand (&) operator (also called the address-of operator), which denotes an address in memory.

A data type that contains an address. i.e.

a pointer is a variable, with the address of another variable as its value. (指针是用来存 另一个变量地址的 变量) In C++, pointers help make certain tasks easier to perform. Other tasks, such as dynamic memory allocation, cannot be performed without using pointers.

All pointers share the same data type - a long hexadecimal number that represents a memory address.

The only difference between pointers of different data types is the data type of the variable that the pointer points to.

A pointer is a variable, and like any other variable, it must be declared before you can work with it. The asterisk(*) sign is used to declare a pointer (the same asterisk that you use for multiplication), however, in this statement the asterisk is being used to designate a variable as a pointer.

Just like with variables, we give the pointers a name and define the type, to which the pointer points to. （指针的类型即是其包含的地址所代表的变量的类型） The asterisk sign can be placed next to the data type, or the variable name, or in the middle.

Here, we assign the address of a variable to the pointer.

There are two operators for pointers:

The asterisk (\(*\)) is used in declaring a pointer for the simple purpose of indicating that it is a pointer (The asterisk is part of its type compound specifier). Don’t confuse this with the dereference operator, which is used to obtain the value located at the specified address. They are simply two different things represented with the same sign.

To be successful as a C++ programmer, it’s essential to have a good understanding of how dynamic memory works.

In a C++ program, memory is divided into two parts:

Many times, you are not aware in advance how much memory you will need to store particular information in a defined variable and the size of required memory can be determined at run time.

You can allocate memory at run time within the heap for the variable of a given type using the **new **operator, which returns the address of the space allocated.

This allocates the memory size necessary for* storing an integer on the heap*, and returns that address.

The allocated address can be stored in a pointer, which can then be dereferenced to access the variable.

We have dynamically allocated memory for an integer, and assigned it a value of 5.

The pointer p is stored in the stack as a local variable, and holds the heap’s allocated address as its value. The value of 5 is stored at that address in the heap.

For local variables on the stack, managing memory is carried out automatically. On the heap, it’s necessary to manually handle the dynamically allocated memory, and use the delete operator to free up the memory when it’s no longer needed.

This statement releases the memory pointed to by pointer.

Pointers that are left pointing to non-existent memory locations are called dangling pointers.

The delete operator frees up the memory allocated for the variable, but does not delete the pointer itself, as the pointer is stored on the stack. （free 了heap的内存，但是包含原地址的pointer并没有被delete）

The NULL pointer is a constant with a value of zero that is defined in several of the standard libraries, including iostream.

It’s a good practice to assign NULL to a pointer variable when you declare it, in case you do not have exact address to be assigned.

A pointer assigned NULL is called a null pointer. For example:

Note the brackets in the syntax. 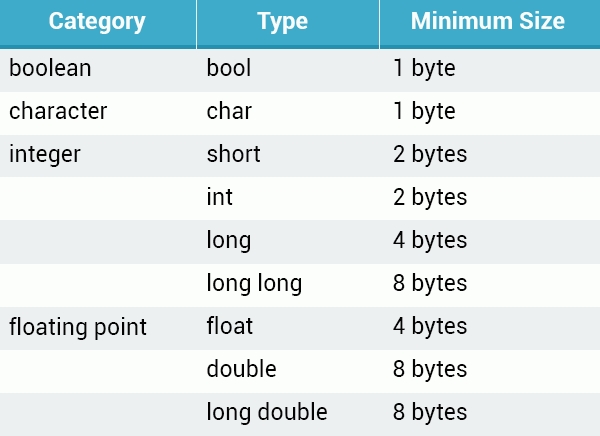 The sizeof() operator can be used to get a variable or data type’s size, in bytes. Syntax: sizeof (data type) e.g.

The C++ sizeof() operator is also used to determine the size of an array. For example:

Explanation: On our machine, double takes 8 bytes. The array stores 10 doubles, so the entire array occupies 80 = (8*10) bytes in the memory.